Murder by The Dozen

Two interesting murder mystery games that plays similar to the popular Host Your Own Murder board game, CBS' Felony and Mystery by the Dozen are each a collection of 12 murder cases for up to 8 players. The computer serves as a tool that provides case histories, obtain autopsy and lab reports (when you request them), and aid in constructing a profile of each victim. The players (if you play solo, then you're just competing against yourself) are responsible for taking notes, looking up clues that the computer designate, and solve the case. Your goal in each case is twofold: identify the murderer, and collect enough evidence to convict him/her in the court of law. As a cop, you have several options at your disposal on each turn. You can interrogate witnesses/suspects, examine physical evidence, or go to another location on the game map. Each option takes up some "game time," so you must budget and spend your time carefully to optimize the results. Choosing the order of action is also important-- if you discover the shoe in the victim's bedroom before ordering the lab report, for example, the lab report will contain the analysis of that shoe. If you order lab report before thoroughly investigating the crime scene, you may miss out important analysis and waste precious game time.

For all the computing power at disposal, the games curiously relies on the *players* to determine the final outcome. Once you feel you know who the killer is and have enough evidence, the computer will tell you to look up the solution in the solution book that comes with the game (downloadable below as "Solution"). The computer will then spits out a rough rating of your sleuthing skills based on the time you take to solve the case. In a multiplayer game, trust is not a problem, because the first player who thinks he/she solves the case can announce his/her reasoning to the group, which can be cross-checked with the official solution. If you're playing by yourself, though, this paper-and-machine combination is not effective-- you can "cheat" by just announcing to the computer that yes, you did solve the case, in order to obtain the rating. But of course, no self-righteous sleuth will ever do that ;)

In the end, despite dubious implementation scheme of mixing paper and computer, both entries in the short-lived "Mystery Master" series succeed in delivering 12 very well-written, intriguing murder cases that cover a wide range of subjects and motives. Strong deductive skills are required to isolate red herrings from clues, and then from minor clues to real evidence that will put the killer behind bars. Highly recommended, especially if you can find friends to play against and to keep your cheating tendencies in check :) 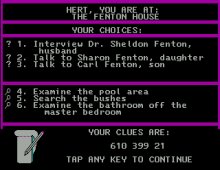 Murder by The Dozen screenshot

People who downloaded this game have also downloaded:
Murder Cruise, Murder in Venice, Murder on The Zinderneuf, Mystery of the Mummy!, Jack The Ripper