A great game from the team that brought cult classics Heimdall 1 and 2, Litil Divil is a charming action/adventure that will appeal to young and old (err-- I mean seasoned) adventurers alike. As the game's name suggest, you play a little devil named Mutt, who likes nothing better than sleeping in his peaceful abode in the underworld. As luck would have it, Mutt is chosen as this year's hero (i.e. victim) to venture forth into the mysterious Labyrinth. His mission: to bring back the Pizza of Plenty from the mysterious Overworld. With cries of "anchovies" and "capers" behind his back, the game begins as Mutt gloomily enters the great unknown...

Although billed as an "action adventure" game, Litil Divil is better described as an "action / puzzle" hybrid: much of the gameplay involves helping Mutt avoid the various traps and obstacles in the tunnels, as well as fearsome attacks from underground monsters. Reflexes are therefore essential, especially in avoid the dreaded "Entity" character that occasionally appears out of nowhere to nab Mutt to the dreaded Quit/Play Again screen-- which means either restoring or playing the entire level all over again. When Mutt enters one of more than 40 total rooms in the game, the action shifts from first-person to isometric 2D perspective. Although you must figure out the objective of each room, they are for the most part quite simplistic. Some physical, object-oriented puzzles are quite entertaining and original, while others require pure reflexes to solve or items in your inventory. Speaking of items, fans of traditional adventure games will be very disappointed: Mutt will use the item automatically if the situation calls for it, although you still need to figure out whether Mutt needs an item he doesn't already have, and where such an item could be found. There are also many "Goodies Rooms" where Mutt can buy items-- although most of them are weapons or shields that are helpful in keeping up his health level.

The real star of the game are the charming British humor and those ingenious puzzles that require both reflexes and intuition. Some inconveniences, such as the annoying Entity and the fact that you can only save games in "Save Rooms," dilute the fun factor somewhat, but anyone who likes puzzle games with plots-- and who doesn't flinch at arcade sequences-- will definitely enjoy Mutt's adventure.

Note: This is the "Deluxe" version of the game, released 2 years on CD-ROM after the original floppy release. It adds a few animated cut-scenes and rooms that are not in the floppy version :) 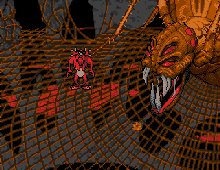