Lane Mastodon vs. The Blubberman

Written by Steve Meretzsky, the first Infocomics story is like watching a decent "B" movie, complete with stereotypical aliens, a bumbling superhero, and tongue-in-cheek humor in the style of Meretzsky's earlier Leather Goddesses of Phobos. Fun for a good laugh or two, but the illogical plot and sophomoric humor may turn some off. 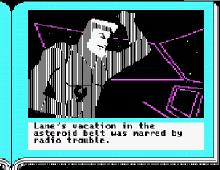 Lane Mastodon vs. The Blubberman screenshot

People who downloaded this game have also downloaded:
James Clavell's Shogun, Leather Goddess of Phobos [Solid Gold], Nord and Bert Couldn't Make Head or Tail of It, Gamma Force in: Pit of A Thousand Screams, Beyond Zork: The Coconut of Quendor