Gamma Force in: Pit of A Thousand Screams

Third in the series, Gamma Force is IMHO the best Infocomics in the series feature a cast of cool superheroes, equally interesting sub-plots for each character, and a lot of action. The story's beginning is a little disorienting as perspectives change rapidly. More emphasis on backstory would have been better, but this is still a lot of fun to watch and the animations are cool. 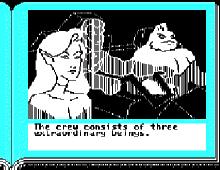 Gamma Force in: Pit of A Thousand Screams screenshot