One of Cinemaware's last releases before the company disbanded and one of the few games it did not develop in-house, The Kristal is a zany outer-space adventure game that combines traditional adventure with arcade sequences that occur too often for my taste. The game seems to follow the tongue-in-cheek formula of "B" movies such as Flash Gordon and Plan 9 from Outer Space, but fails miserably flat due to poorly written dialogues, puzzles that don't make any sense, and the annoying reliance on money, which is in extremely short supply. The thin excuse of a plot puts you in the shoes of a carefree space jockey who had one too many at a galactic bar, and found himself stranded on an alien planet. The Kristal isn't really worth anyone's time, unless you want to see how bad a Cinemaware game can get. Underrated, perhaps, but not by a longshot. 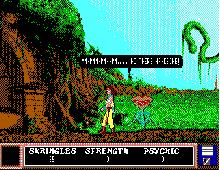 People who downloaded this game have also downloaded:
In The Dead of Night, L.A. Law, Inca, Last Half of Darkness, Kaged