The Islands of Danger remains this day one of the most unique and memorable text-mode game ever written. As one of the first shareware titles programmed by Richard Carr, IoD bodes well for his subsequent minor fame as creator of Capture the Flag, another shareware classic. J. Michael Ambrosio wrote a great review of what makes IoD so much fun:

"Islands of Danger is an arcade-style game that pits you and your hovercraft against a series of seven islands that have been fortified with missle launchers. You must pilot your craft into and around forests and swamps, blast your way through walls, and duck around mountains, all while deftly avoiding an endless barrage of guided missles. Can you make it through to the last island and rescue your best friend?

Every aspect of this game is impressive: the expansive and colorful visual design, the fast-paced game play, the attention-getting sound effects, the extensive on-line help. But, as a programmer, the thing that impressed me the most is the amazing, and surprising, degree of artificial intelligence exhibited by the game.

First, there is the island generation algorithm. All of the islands are randomly generated, so the game provides new challenges every time you play. But the island designs are surprisingly complex, considering that they are computer-generated. There is a mix of open fields, mountain chains, and dense forests. Narrow passageways twist through the forests and around swamps, providing barely enough room for your hovercraft to squeeze through. If you follow these passages, you almost always find a cluster of missle launchers at the end. This is especially evident in the last three islands of the sequel, Islands of Courage.

Another display of intelligence is in the behavior of the guided missles. In most games, you expect the missles to come straight at you, fast and furious. In this game, each missle has its own unique plan of attack. If a group of missles is headed towards your ship, a few of them will take the direct route. But sometimes, they just fly right past you, then turn around and close in from behind. Other times, they will be headed right into your line of fire, then suddenly stop and change direction, just before you are about to shoot them. They almost never come straight at you, but instead dance back and forth, confounding your attempts to destroy them until they are almost on top of you. It is truly amazing just to watch the missles, and how they seemingly work together to defeat you." Overall, a great example of how great gameplay without flashy graphics can be created. Highly recommended, especially to fans of Pyro 2, another ASCII classic. 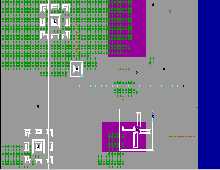 People who downloaded this game have also downloaded:
Journey, Imogen, Indiana Jones in: Revenge of The Ancients, Inspector Gadget, Bureaucracy