Hook is an average game based on the movie of the same name, which is a modernized version of the classic tale. Peter Pan, who is now living a normal adult life, is compelled to relive his roguish past when his old nemesis Captain Hook kidnaps his children. Vibrant graphics, charming Tinkerbell as your sidekick, and decent puzzles can't hide the below-average writing, awkward interface, and the fact that the adventure is over all too soon.

Movie tie-ins for the most part suck. They are little more than rushed, buggy attempts to cash in on a successful franchise. Hook is a movie tie-in, and while I wouldn't go as far to say that the game is terrible, it is certainly not a true classic. If you've never seen the movie then you are going to be at a loss as to what is going on. You play Peter Banning who doesn't know that he is (or was) Peter Pan. Your children have been kidnapped by the evil Captain Hook and it is up to you to journey to Nevernever land to rescue them.

My biggest problem with Hook is that it could have been a damn good game, but it tries to follow the movie too closely. This isn't necessarily a bad thing but Hook fails badly at it. I can't help but feel if the game had either done more to follow the movie (there were some pretty emotional bits in it... not that I cried or anything.. nu uh!) or had gone in a completely different direction with the story it could have been a decent adventure.

OK, I've panned the game enough, is there anything good i can say about it? Well, some of the earlier puzzles are quite fun to solve (especialy one involving an anchor and some rope), the game looks very nice and at least Robin Williams doesn't have body hair to rival a cro-magnon primate (if you haven't seen the movie then accept that what I just said was funny and move on. who cares if it make no sense to you).

Game based on the movie Hook. You play Peter Pan who has to rescue his kids from captain Hook. With the help of Tinkerbell you do a great job! Back to Neverland!!! 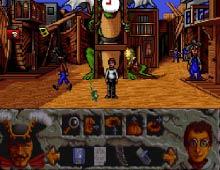 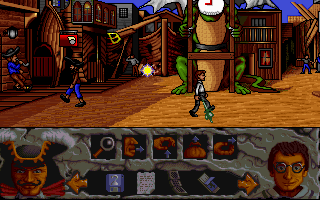 People who downloaded this game have also downloaded:
Hobbit, The, Garfield: Attack of the Mutant Lasagna, Hitchhiker's Guide to the Galaxy, The, Ace Ventura, Adventures of Robin Hood