Ingrid's Back is Level 9's sequel to the very funny Gnome Ranger, and sports improvements over its predecessor in every respect, including a brilliant "racetrack" system that allows you to control other characters and give them a much wider range of movements and interactions than before.

The plot in Ingrid's Back follows a similar wacky, unpredictable turns of events that fans of the first game came to expect. After being banished from her village in Gnome Ranger, the lovable but exceedingly accident-proned gnome Ingrid finally found her back... just in time to discover that Little Moaning (yup, that's the village's name) is about to be transformed into prime real estate development by the new landlord Jasper Quickbuck, whose name says it all. This involves evicting all the poor gnomes out of their homes, of course, and so it's up to our unlikely heroine once again to save the day. Since the main puzzle is getting the various inhabitants to sign the petition that Ingrid initiated, there's a lot of interactions with other characters. It is here that the game truly shines: the text (with its unmistakable British charm) is cracking stuff, and characters so fleshed out and hilarious that you'd be glad none of them is your relative in real life. As in Knight Orc, you can follow people around as they go about their business, and ask (or force) them to do your bidding. The game also requires you to use advanced commands like FOLLOW and FIND people to accomplish your tasks -- all the more better to show off the game's robust parser that's come a long way since Jewels of Darkness.

While the number of locations is small, each is chock-full of details and many objects and people to interact with. You can play the game's 3 parts independently if you wish, but obviously the plot makes more sense if you play them in order. The game is also very friendly to newbie adventurers, such as reminding you which gnomes haven't yet signed the petition after you got a few signatures. Overall, this is one of Level 9's best games that further affirms their reputation as "Europe's Infocom."

Note: The manual link below is the PDF version of the very amusing Peter McBride novella that came with the game. 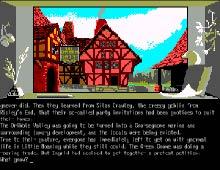 People who downloaded this game have also downloaded:
Gnome Ranger, Knight Orc, Demon's Tomb: The Awakening, Hitchhiker's Guide to the Galaxy, The, Hound of Shadow, The