It's rare to see succesfull crossover games so early ('88) that were actually good playable and fun, but FTA seems to succeed in it. It's main hart is a somewhat simplified RPG game, but there are many adventure elements and search "quests" involved that it's just more then that.

Although there are better games out of this peroid, and certainly games with better graphics, FTA overrules them all in one thing : written word, story and gameplay. Everything is so smashsolid, that you'll soon be sucked up and play night after night after night.

And hey, a couple of years back they released FTA 2, which was more of a remake then a new game, so you could always consider going to the store for that one if you can't get this gem running.

Faery Tale Adventure is the PC version of the Amiga classic that is unfortunately much worse than the Amiga version due to poorly implemented graphics, and bad scrolling. That probably explained why the game never sold well in PC stores. Which is a shame, because the great gameplay of the Amiga version is still intact in this version.

In this game, considered by many Amiga players to be one of the best introductory adventure/RPGs ever made, you play one of the three brothers who are tasked with recovering the magical Talisman to ward the village from impending evil. The game is played from an innovation overhead isometric angle, and you have considerable freedom to take on numerous subquests, as there is no time limit. The game's hallmark is the sheer variety of gameplay and colorful characters you will meet and fight. For example, later in the game you will have an ability to ride an enormous turtle to cross the seas, and fly on a swan to cross over mountains to explore unreachable valleys. Various spells can be cast with appropriate magical artifacts. You one can make light, heal yourself, use a card to call or teleport yourself about the country. Simple combat sequences and the lack of detailed statistics make this a good game for RPG newbies and adventure fans, although the vast gameworld (which spans nearly 17,000 screens worth, with terrain ranging from a desert, to ice-covered landscape, underground caves, and a witch forest) and numerous subquests should also appeal to hardcore RPGers who want a relaxing break from complex epics. Definitely MicroIllusions' best game, and well worth a play through. Highly recommended, especially for novice RPGers.

Very nice adventure RPG with all the stuff in it: ogres, dragons, magic, etc. Walk with your brother in the land of Holm. The game had one of the biggest worlds in that time. Over 15000 screens... 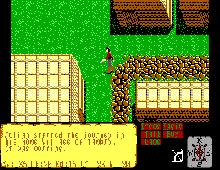 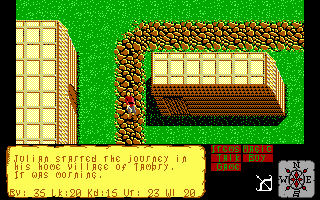 People who downloaded this game have also downloaded:
Halls of The Dead: Faery Tale Adventure II, Legend of Kyrandia, The, Gobliiins, Arthur: The Quest for Excalibur, Flight of the Amazon Queen