Evidence is a fun and quite underrated adventure game from French developer Microids. You are Dan Singer, reporter from Channel Z. You just broke up with your girlfriend Sarah Hopkins when she calls you, claiming she has discovered something very important and thinks this might be the story of the century. Unfortunately, before you can talk to her she is murdered - and you are suspect number one. Naturally, you have to prove your innocence... and do it fast before time runs out.

There have been more than a few attempts at mixing other genres - most notably action - into the traditional inventory-based gameplay of adventure genre. But few have succeeded, mostly because either the action part is too easy, too hard, or too irrelevant. Evidence deserves notice for doing it better than most. Action sequences are interspersed seamlessly and logically into the game, and none of them is boring or too frustrating. For example, after the first take-stuff-that's-not-nailed down adventure sequences early in the game, the traditional third-person perspective suddenly shifts to a first-person one, in which you must shoot your way in DOOM style out of the hospital. Then the game throws you back in adventure mode, only to transform again and again throughout the game into many other genres, including beat'em up, shoot'em up, a car/boat chase, and even a snooker game. Microids calls these sequences "real-time action," and that is exactly what they are. The result is a fun adventure game that will give you more adrenaline rush than most; and while these sequences are hardly the best of the genres they take from, they are quite fun and interesting.

The plot development, despite the promising promise, is not all that good. In contrast to Infocom's classic detective game Deadline or even the more recent Byzantine: The Betrayal, there is no cool plot twists or a larger conspiracy to uncover. But the plot is decent enough, and most puzzles interesting and challenging. There is some pixel-hunting in the game, but the game has a very useful feature that reduces much of this problem: a "look" command you can activate at any time from the bottom menu. When all is said and done, Evidence is a surprisingly good mix of many genres that adventure fans should find refreshing. Not a top game due to a somewhat bland plot and sub-par writing, but it comes quite close. Recommended! 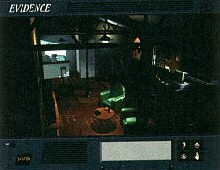 People who downloaded this game have also downloaded:
Dark Eye, The, Darkseed 2, Bureau 13, Darkseed, Flight of the Amazon Queen