Two of the most underrated adventure games ever, both Discworld games are based on Terry Pratchett's pun-filled fantasy Discworld series, in which the whole world is carried through space by a turtle, and idioms and puns do have a life of their own. As bumbling wizard Rincewind, prevent the Dragon from destroying the world in Discworld 1 and find a way to convince the disillusioned Death to resume his day job in the sequel. Both games have great humor (although dialogues drag on at times), and some of the most devious but logical puzzles ever designed. Famed Monty Python veteran Eric Idle's performance as the voice of Rincewind is flawless, althought some dialogues are very long-winded to the point of frustrating. Clever puzzles and hilarious animations, however, more than make up for it.

Discworld is a flat circular planet that rides on the back of four giant elephants; they in turn sit on the shell of a giant turtle that carries the Disc through the infinite boundaries of space. Sounds confusing? Indeed, this is just an example of the distinctive tone of the Discworld universe. Discworld II: Mortality Bytes! (also known as Discworld II: Missing, Presumed...!?) continues with the adventure of the dimwitted wizard Rincewind. This time, rather than saving the city of Ankh-Morpork from the wrath of the evil dragon, Rincewind must use his wit to solve the mystery of the undead and even save Death himself!

Discworld II: Mortality Bytes! is based upon the Discworld novels by fantasy novelist Terry Pratchett. In this installment, Rincewind's besotted attempts to disarm an assassin's bomb results in blowing Death off to a faraway and very pleasant place. It is so nice that Death does not want to go back to his job. This leaves all the dead souls attached to their corpses, running around as zombies. As the incompetent wizard Rincewind, it is your duty to find Death and convince him to return to work. Along the way you will produce a clickie (a movie in the Discworld universe), become a substitute for the Grim Reaper, and finally save Death's life.

Discworld II: Mortality Bytes! is made by the same developer who made the original Discworld, using the same but tweaked game system. It shares all the strengths of the original game and improves on several of its predecessor's weaknesses. The main improvements are the increased graphic resolution and full screen animation in the cut scenes. The game has a cartoon look in style. As with the first game in the series, the background art is beautiful. This time around, however, the character animation is equally excellent, thanks to the use of higher resolution graphics. Over 25,000 cels of hand drawn animation have been used. As with its predecessor, Pratchett is personally involved in the conception of and scripting for this game. Several of Discworld's voice actors return in this game, including Eric Idle as Rincewind. Tony Robinson has not returned, nor has John Pertwee since he has passed away before production begins. On the other hand, Nigal Planer (Neil in the BBC comedy The Young Ones) joins the cast to be the voice of Mad Drongo, as with impressionist Kate Robbins who also makes a return appearance. Idle actually plays 2 parts in this game"as Rincewind and as a singing skeleton in Rincewind's commercial. The story features over 2,000 lines of spoken dialogues and sung lyrics. While Perfect Entertainment is based in London, England, recording sessions for voiceovers are held both in Santa Monica, California, and London. Among the strongest aspects of the game is the high quality of the voice acting, making it among the funniest games around. The unusual amount of humor in this game is derived from the use of parodies of pop culture references as well as movies such as Lethal Weapon 3 and Monty Python's Life of Brian.

There are 2 versions of the game to provide native support for both DOS and Windows 95. First released in Europe, the game is originally called Discworld II: Missing, Presumed...!?. The name is then changed to Discworld II: Mortality Bytes! during its North American release. No official reason has been given for the name change. All the characters are designed and animated out of house by professional animation studio. There are a large amount of cut scenes and animations, including extreme close-ups. Perfect Entertainment must be congratulated for its effort to translate onto screen such a lavish and complex world of Pratchett. Without live action videos cluttering up valuable storage space, the 2 CDs (on which the game comes) provide an enormous amount of solid gameplay. As a bonus, the original Discworld game is even included on a separate CD.

Discworld II: Mortality Bytes! uses a simple interface. You can look at an object or invoke action upon the object. The context determines what that action is. This can result in a simple mindless game, but Discworld II: Mortality Bytes! avoids this by having a large number of objects, including many red herring objects. The inventory is kept in a walking chest that follows Rincewind around, though Rincewind has additionally a very small personal inventory. Many of the minor flaws of the original Discworld have been corrected. There are no graphical or audio glitches. There is no pixel hunting"all the objects you need are now clearly visible. The puzzles are actually doable this time around, thus it is humanly possible to complete this game without a walkthrough. The game is still very difficult, with some puzzles of questionable logic. You can never die in this game, so you do not have to worry about saving the game periodically.

The story of Discworld II: Mortality Bytes! plays out over 4 acts and an epilogue. In the earlier acts, Rincewind's goals are to summon back Death and help to improve the grim reaper's public image by making him a Holy Wood (a parody to Hollywood) star in attempt to persuade others that Death should be embraced with but not be scolded on. In the latter acts, Death's new found star struck fame has given him even lesser incentive to return to his old job. Rincewind must then temporarily take over the grim reaper's duty while trying to convince him to return as the true holder of the Soul Scythe.

Discworld II: Mortality Bytes! is a large and long game with a good developing story. This is not a game where you spend most of the game piecing together past events"the story takes place as you play it. The game is filled with good puzzles. You definitely get your money's worth playing it. The graphics are beautiful, with effective cut scenes. The game starts and ends with an entertaining and funny animated music video That's Death written and performed by Idle. On the other hand, there is an awful lot of long winded dialogue. Some of it is funny, but it still can get tedious at times. The humor is more of Monty Python than of Pratchett and it tends to overdo themes. The worst part is the overuse of self reference"Rincewind frequently remarks upon the fact that he is in an adventure game. A little bit is funny, but too much breaks the mood of the game. In a few places, Rincewind literally shouts Clue! at you. 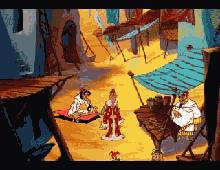