The third and final game in the Lord of the Rings trilogy game series from Melbourne House. Crack of Doom is a bit different than the other games because you can only control one character and that is Sam Gamgee. I find this a bit annoying since Sam isn't the main character in the game but also one of the more boring characters although I admit he is a good part of the entire story.

There are also several times the story in the game doesn't match with the original story but it doesn't matter that much since it makes the game more challenging and if you have read the books you still have a feeling about what's going to happen. The game does offer an improved game engine compared to Shadows of Mordor as everything is running a bit better and there is a more text in the game making the game story better.

The images between each sequence are still good as well but the overall quality have been improved but still not too impressive even when considering the year it was developed. Crack of Doom is a good ending game in the series and if you have already completed the first two games I can't think of a reason why you shouldn't play this one as well.

Beam's The Tolkien Trilogy closes on a positive note with this solid adventure that is both longer and more complex than its predecessors. The game follows the adventures of Frodo and his band of Hobbit through to the end of Tolkien's novels, climaxing at the memorable Ring forging scene. A great game in all respects, except for the fact that unlike earlier games you are restricted to playing one character (Sam the Hobbit) this time around. 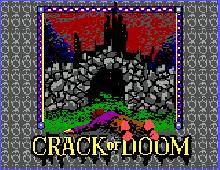 People who downloaded this game have also downloaded:
Hobbit, The, Fellowship of the Ring, The, Arthur: The Quest for Excalibur, Bureaucracy, Castle Adventure