The Settlers is obviously a kick ass well known game that revolutionised games and was the first of its type. It got its creator 'Blue Byte' into the lime light of computer games and was a pinicle of strategic gaming. Many adapatations of this game have been made, I think they have now reached 'The Settlers IV'. I have played this one, and The Settles II, and I must say that both are fantastic games.

In this version of the game, you can run it from ANY Amiga, but with certain drawbacks. For example, the amount of memory that your Amiga has will alter the size of map that you can play on, and the complexity of the settlements you can build. Luckily, you will be running this game through an emulator and will not be required to buy huge expanses of RAM, as you will be able to have as much as you want. The graphics and sound of this game are also excellent. The cute little guys walking around will make you laugh at the things they do (well, for a short while at least).

I've talked about a load of the technical rubbish, so what is this game actually about?

Well, in this game you are the founder of a little kingdom. You start off in the game bu having to choose an area of land to build on. You can choose anywhere that has a castle symbol. Try and search around for an area with pleanty of gold and minerals, as these will affect the long term effectiveness of your empire. After building base, you will be able to build the other buildings that are avaialable to be built in the game. Each building has an effect on another building or person, and it is like a huge circle of industry throughout the game. For example: Firstly, you must build lumberjacks, quarriers and saw mills, in order to make usable wood and stone, which is used to build other buildings in the game. This little circles of buildings are the foundation of your settlement, and without them you will probably very quickly loose the ability to build more buildings and progress in the game. You must also build a forester if you want your lumberjack to continue to have trees to chop down. I won't explain anymore of the systems of industry, but I will let you sort them out all by yourself!

I love this game, it is great fun and can last for hours. You can even play multiplayer if you have two mice to play with! Great stuff.

In order to play this game you must have owned the orginal and still own the manual, as it has to have game codes entered at the startup screen. There is no way to bypass this unless you have a copy of the manual.

One of the best Amiga game. Strategy game, from the medival eve. You have to build your own empire, control the work of people, conquer the enemies, and enjoy the amazing detailed graphics and music. 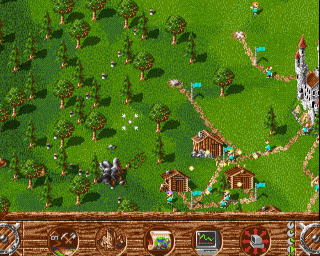