This is the sequel to the ground breaking game, Populous. Made by a company which is famous for its management and strategy games, Bullfrog has yet again provided is with one more great classic. Giving us several more options, and obstacles than the previous game did. If you haven't played the original game, here is the basis of what to do in the game:

You are a God (cool, huh?), and you must get these little people to pro-create, so that you can build more and more people, the more people you create, the faster that even more people are created, but only when they are in huts or castles. Depending on the amount of space the settlements have to grow in, depends on the amount of time a person takes to be created, and its status. For example, if the people just live in tents (which take 1 square), then people will come out very quickly, but will only be armed with there fists, and will be really weak. But if you have got a full size castle (which takes 16 squares), then you will be able to churn out top notch units, but they will take much longer to be created, and then there are all of the ones in between, and I think there are 16 different types of settlements all in all.

On each level, there is an enemy which you must defeat, as well as a different scenary (there are around 4 or 5 different ones). The scenary doesn't matter too much, but the enemy of course does.

You can defeat the enemy in various different ways, but either way, you will need to be much bigger than the enemy is. The bigger your populous, then the more mana you have to use to cast spells against the enemy (and in the later levels, that can also work for them, and they can cast spells on you).

You can also get your people themselves to attack the enemy, and take over there land. You can also let all of your people gather at the anchor point, where they will all join and make a big strong unit, which can then be created into a knight (or not, if you prefer not to). The Knights simply wonder between enemy cities, and burn them down, which leaves debri behind, which is then cleared, and your people can settle there.

I could go on for ages talking about this game, but there is a lot in there, which you should find out yourself. This really is a great game, which will keep you playing the several hundred levels for hours on end. Truely a class game :)

More than a worthy successor to Populous - this one's is a brilliant game with a lot more possibilities than the original game. Though it doesn't have the ingenious simplicity of that one Populous 2 has some advanced features like the RPG-like-elements of building up your deity. Yes, right - you gain power in the course of the game and are able to choose the strengths you want to build up. You can invest into the Fire-Powers to be able to cast some mighty fire-spells for example. The game itself bases on the same principles like Populous did - you got to kill all your enemies. But you've got far more possibilities to do that. You compete against other Gods like Epimetheus or Pan, which are both pretty easy to defeat (it's possible to win a level in less than a minute, Pan once even committed suicide letting me win within 5 seconds) - but don't worry - you get harder opponents soon enough.

The ancient greek atmosphere is great - many levels, spells and other surprises guarantee long gameplay, a Top-Game!

The god simulator. You are the god, who can change everything in the world. Control towns, population, etc. So.. it's a strategy game. The Populus 3 were released in the near past on the PC, and uses 3D view. Populus 2 uses isometric view. 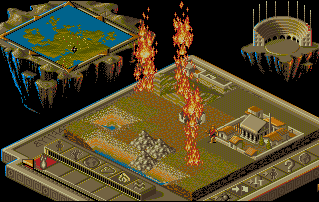