Police Quest 1: In Pursuit of the Death Angel

Ah, the good old days of old graphic adventures. Back in 1980's the adventure games were mostly based on a textual descriptions of the area in which you were at the moment and an option to move north, west, south and east as well as write simple commands such as walk, take, look and such. Yup, those were the days... Those adventures were sometimes so complex and hard that people would give up after computer responded with "unknown command - kill". Grrrr, some games had such a poor vocabulary that they couldn't recognize some of the most usual words and this made them not so popular unlike the arcades. Then Sierra came up with its first graphical adventure - King's Quest, and changed the history of adventures forever. Many other Sierra adventures were made and released soon afterwards and one of them was Police Quest: In Pursuit of the Death Angel.

PQ puts you in boots and uniform of a rookie police officer Sonny Bonds in his first day on duty in Lytton Police Department. You will learn how it is to work in a traffic division and see all the bad and good sides of the job (oh, I remember stopping a speeding car with a gorgeous blonde that offered me a deal...). After a few assignments, Sonny will be promoted into a homicide detective and get his first real task: find and capture Death Angel, an extremely dangerous killer. This is where life of a police officer becomes dangerous...

"In Pursuit Of The Death Angel". The first episode of the adventure game series. You are a policeman student, and have to solve many cases. Very simple graphics, pure music and sounds, but exciting story! The game uses the antique sierra type in interface, like the first King's Quest series. You have to type the commands, for example: take radio, get out car, etc. 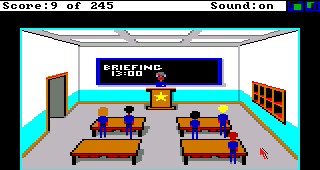 Police Quest 1: In Pursuit of the Death Angel screenshot