1968. Vietnam. A helicopter crashed and seven survivors are trapped on the enemy territory. They have 58 miles to cross to reach the US military base and rescue themselves. Are they going to succeed? It depends on You and Your survival skills. Lost Patrol is part action - part strategy game. On Your way to the base You will have to fight forces of Vietcong, send scouts, dodge sniper fire and booby traps. Nice one, I just wish it had better graphics. 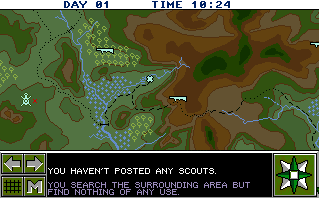