Lord of the Rings: Fellowship of the Ring was the first true graphic game taking the challenge to feature John Ronald Reuld Tolkien's famous and fantastic fantasy trilogy. Having Electronic Arts and Interplay behind it the developers had many great tools to create the ultimate Lord of the Rings game - and they did!

The story in the game is simply the best in the game without a doubt. While following the original story 95 % including almost every character from the books and all famous places the developers have still succeeded to bring many other related quests you have to solve even though most of them don't need to be played. But they are well done and haven't been made just to add content. Even though the story is being followed very well it's of course still up to you whether Boromir will die at the same place as he does in the original story but I only consider that good as it would otherwise give you too little control of the game if they had implemented things like this into the game.

Probably the area where the game could be improved the most. Many of the characters, especially the Hobbits, are looking pretty much the same which means it's often quite hard to keep up with what character is walking where. There are also several graphic glitches in the territory when you walk around in the world. At the menu interface the graphics are much better and the portrait there is for each character is well done. The small movies being played after you have completed a larger task are quite good and really offers a great atmosphere and spice the game up a bit. As mentioned already the graphics are quite good in the interface which of course makes it easier to control and play the game. It has been divided up into several area like character inventory, interaction, skills etc. and you can reach pretty much all things with a max. of 3 mouse clicks or just the faster keyboard commands. The game doesn't offer much sound other than the small simple sounds during combat and when you click on a command. Of course there is the title music which is simply amazing. It is recommended to listen to this in it's full length.

Overall the best game ever based Lord of the Rings. The game has succeeded to follow the original story pretty much all the way while it still offers a lot to people who have already read the books. Overall a very recommended game to get as their are many hours of game play as the world is huge and you can always go back almost to the start of the game.

Inspired by Tolkien's story, the Lord of the Rings. It's an adventure game, with some Zelda feeling. Lots of text, pure grahics. 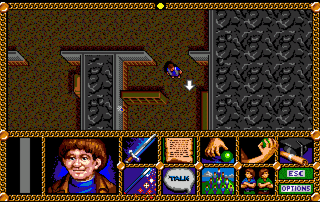 People who downloaded this game have also downloaded:
Lemmings 2: The Tribes, Lemmings, Lemmings: Oh No! More Lemmings, Populous 2, Secret of Monkey Island, The