Lemmings is a dudey little game that was made sometime in the 90's, and was a MEGA hit... It is somehow a really GREAT game... even if it is based on lemmings.

The idea is simple really, you have loads of lemmings falling out of a trap door in the sky, and you have to get them safely to the exit... SIMPLE! I hear you shout... far from it! Some of the levels in this add on pack are just so impossible! Well, there must be someway to do it, but you need to have reflexes the speed of a flying electron...

But even so, it is a really great feeling when you work out how to do the particular level. Each level has got a certain amount of each profession that you can place on each lemming. There are 9 in total I think, including - Builder, Digger, Diagonal digger, Basher, Blocker, Blow Upper, Umbrella, and a few others... Using these options, you must make your way across the levels. Usually just one lemming will need to pave the way for the rest, and sometimes you may even need 5 lemmings working on something at the same time, which proves VERY taxing!

If you have played lemmings, then you should play this too! It really is great!

In all likelihood, every computer gamer understands the premise behind the Psygnosis release Lemmings. Like classic educational gaming such as Oregon Trail, many schools put Lemmings on their computers in order to teach children the basics of logic, strategy and puzzle solving. It is a great game for kids to practice working together, often with one child run the controls and others shouting brilliant ideas at him. Oh No! More Lemmings is added on or expansion packs to the original Lemmings game. It came out some time after the original, and was developed by DMA Design Limited. Like the mother game, it was created for many different formats.

Oh No! More Lemmings offers a few new twists to the age-old classic. First of all, with this "data disk," the user now has a choice of five different difficulty settings to play, ranging from "tame" to "havoc," each with twenty new levels. Each of these levels is completely unique. In other words, the user will not have to complete the same level in various difficulty settings, just with less time. All levels in each setting are fresh and new. It does use the same Lemmings engine, but the graphics are new and great to view. There are about a half dozen new soundtracks playing in the background that will work their way into the user's ears, and it contains ten new two-player levels. Overall, there are one hundred new levels for the user to try to navigate his little lemmings buddies through, this being main point of the data disk. This is an expansion, not a sequel. The sequel is titled Lemmings 2: The Tribes and can also be found here. To run Oh No! More Lemmings, the user is going to have to have installation information from the original game, or the manual to answer copyright protection questions.

The game play is pretty much the same as the original Lemmings game. There are a few levels with some new twists, such as a highly sped up clock that drives the user insane. All the levels play from the third person perspective, and feature various goals as far as how many lemmings have to successfully escape the level and what types of tools are available for the little guys to use.

This game is addictive and interesting. So if you want have fun you need downloading it immediately. 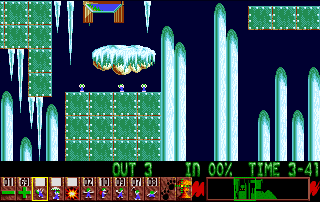