In this game you play 'Cool Coyote'. God knows what the aim of the game is, as I don't think there is actually a story behind it. But what the hell, it's still a truely great game. The game starts off with you in the north pole type of thing, and you must progress through various levels, which is shown at the bottom of the screen as like a flat world. You go through from Ice land, to fantasy land, to ocean land, and so on until you reach the hot land.

Each land has got about 3 or 4 levels each, as well as extra hidden levels. On each level you need to pick up a key, but the key comes in several parts, and in order to find it you have to freeze the baddies, and then explode them. Parts of the key are not in EVERY baddie, but they are in some, and once you find the key, you have to find the door, and on big levels, it can be annoying when you find the door before you have found the key, and then it turns out you missed a baddie right at the beginning of the game and have to go all the way back.

So all in all, this is just your bog standard platform game, where you play as one character, and jump around shooting things. But this game is much better than most, because of all of its extra features, such as a little dog that follows you around when you find him, and he shoots at baddies too, to help you out. There are too many things in this game for me to be able to tell you them all, but the game kicks some ass, so download it now :)

This is the 'trainer' version, which means you can opt for infinite lives at the beginning of the game.

Nice platform game, where you play with a wolf. You have to collect the parts of the key, to open the door and exit from the level. Many stages, quite hard gameplay and features a very cool music! 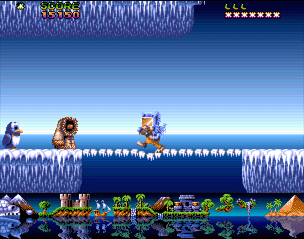