F/A 18 Interceptor is a flight simulator in which you can fly either a F-16 Falcon or a F/A-18 Hornet jet, on one of six missions that are set in the Cold War. The game has vector based graphics, unfortunately it is quite slow on an Amiga 500. 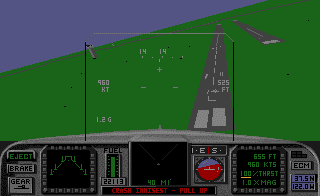