This is a kick ass ninja kickin' game. Basically, it's a 2D arcade conversion where you play as a ninja who has to beat up loads of other ninjas.

This is a really good example of this type of game, as i'm sure many of you have seen, and still can probably see on a few old arcade machines today. The game has got medicore graphics, and on each level the scenary changes. There is a big boss guy at the end of each stage, which must be defeated. I can't really write very much on this game, but nevermind... It's still a cool game :)

I usually don't like this type of game, but this was one of the first I played, so this review is probably bias... :) This is the 'trainer' version.

A simple beat 'em up game, where you can control two Van-Damme styled guys, who can beat a whole Ninja army :) The graphics is very simple, but the game gives a little arcade feeling, which is nice. It's similar to Double Dragon. 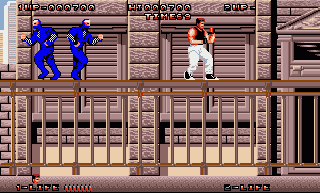