Billy and Jimmy Lee must rescue Billy's girlfriend after she is captured by Mr. Big and his gang. Featuring one- or two-player action. You can do many special moves, and also had a range of weapons. Fight your way through the levels to the final confrontation with Mr. Big. Watch out for his machine gun. 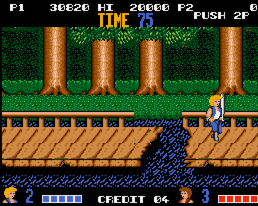