Once again, the little egg guy is on a mission. This time in the crystal Kingdom, I swear down I played this game, although I cannot remember the exact thing that you had to do. But it was just like a regular Dizzy Adventure/Platform game :) The graphics aren't bad, they are in the usual cartoonish Dizzy style.

I love this type of game, they are so fun and can waste hours of a day and keep you hooked on them! If you have never played any Dizzy games before, it is simply a platform type game, but you have to solve puzzles, such as combining objects to do something in the way that other adventure games work, but it is a click and use interface, and you can only carry upto 3 items at once.

And of course, Amiga version is the best. How unusual :) The last in the incredible Dizzy adventure series! Crystal Kingdom is not only that, but it also features the best graphics and was incredibly big! Some people say it's even as big as four "normal" Dizzy games! You start the game with no special goal actually. You will have to find the Grand Dizzy who will then tell you that the holy crystals have been stolen and it's your job to retrieve them. There are four large adventures to solve: the first is in Dizzy Village, the second on a pirate ship, the third on the sea where Dizzy swims for the first time and the fourth in a cave. A huge game with a great gameplay for everyone's joy. Have FUN! 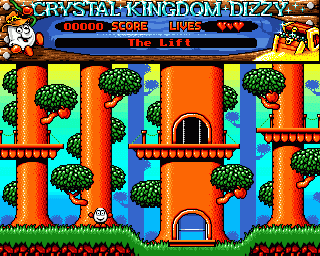