Colonization is a follow up to the more famous Civilization from Microprose as well. Instead of being a complete civilization you are instead trying to colonize what we today call America. Whether you are playing as the French, Spanish, Dutch or English you have to find a good spot to start your colony and then build up your new base in the new world. The race is pretty much starting here since every turn wasted can be expensive as it's very important that you build and grow your colony as fast as possible and expand in all ways you can.

Money is probably the most important factor in the game (when isn't money important?) so you should always focus on bringing more gold for your colony. There are several ways to earn money. You can produce products like tobacco; cotton etc. and sail back to Europe and sell them or trade them for other products like guns. You can also trade products with the natives you meet and of course plunder both them and the other nations. That can give quite a lot of gold as well but is also a bit more dangerous as you are then open to attacks from those in the future. Furthermore you can also grow your colony by teaching the natives the European religion and turn them over to the Christen religion. That will increase your relationship with the native tribes and make everything a bit better. Of course you will get more towns and you have to defend those so it's essential to have military ready to defend your towns as well.

The game ends when only one nation is left or, and this is the main goal in the game, when your colony is strong enough to declare it's independence. Once you have declared it you should be to receive some "expected" visitors from your home country, as they will not allow this. If you defeat them you have won your independence and your colony is now ready to be built up as a nation and the game then ends. Colonization offers many hours of gameplay as you can both play the game as the real world looks like or a random generated map. If you are tired of Civilization, Colonization is a good game to play for a while instead. Overall a very good game and all fans of the business and strategy genes would find this game interesting.

This MAY only be able to run from the HD version, but you can try it in its usual mode (running from disks). Also, you will see the workbench screen, just open the disk and install/play the game from there. 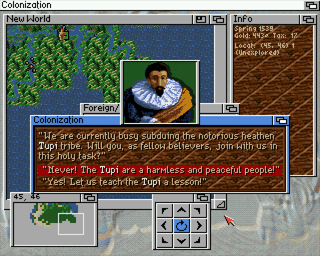