AGA version of Civilization with a lot better graphics. Everything else is the same.

I could write about this one all day long but I'll try to be short. This is definitely the best game ever made (actually, the only one that is better then Civ is Civ II). Ok, here's about the game: You start with a group of settlers that should be used to make Your first city. From this point You can build new units (military or settlers, and later even diplomatic), city improvements or wonders of the world. Spread Your civilization, encounter others, make contacts, sign peace agreements, go to war, destroy others and try not to be destroyed. Discover new advances and move from stone to nuclear age. Many different military units (from militia, legions and catapults to musketeers, ironclads, artillery and even nuclear bombs!), city improvements (such as temples, marketplaces, factories,...) and wonders of the world (Lighthouse of Alexandria, Great library, Hanging gardens, UN building,...) make Civ world huge and always new. Sid Meier is a genius and Civ is all-time game no.1!!!

Civilization 1 is the strategy game I have played most whether it is for Amiga or PC. You start the game by choosing what kind of world you want to play the game in. You can choose from the real Earth, a random map or your own customized one. After that you will have to chose what civilization you want to control and then the game really takes off.

The overall goal in the game is to destroy all the other civilizations or discover a new planet before the other civilizations. It all depends on which way you are heading - through combat, trade or a mixture between these two things. There are several things you will have to research in order to succeed like gunpowder, writing, the steam engine, medicine etc.

You can establish trade routes, build up your cities, build armies and expand your civilization with things like irrigation, road building (railroads when you have discovered it) and mining. There are very good options to find a suitable game level as you can choose on several different computer levels. The graphics are ok, but it's not what Civilization became famous from.

This game works best when installed to the hard drive and requires you to use Kickstart 3.1.

Very popular game, also available on many platforms. Time rounded strategy game, with simple graphics, but many options and features. You have to rise up your Civilization and play through the rest of the history. 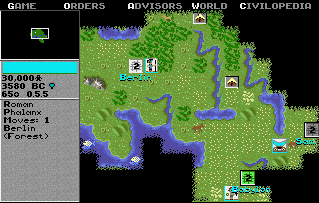