Ahhh the memories. I remember playing this one years ago on my good old Amiga 500. This game is very amusing. The plot goes something like this.. You control the main character called Chuck Rock, a cave man, who is trying to get his wife back from the local weirdo, who just happened to find Chucks wife so irresistable he just had to have her. So it's up to you to get your true love back again. It's a platform game thats just great to look at and play, although you might want to use the FX only mode as the music can get annoying. But apart from that you get to pick up rocks, throw rocks and beat the living daylights outta those annoying dinosaurs. A great game to play if you need some cheering up, even if the later stages are near impossible to complete.

Firstly I would like to point out that this was one of the first game I remember playing on the Amiga, although I got my Amiga 2 years before this game was released... Strange. Secondly, the music in this game ABSOLUTELY rocks arse. Well, ok so it's not that good, but the intro music is just magnificent, it will have you bobbing along to its excellent tune as you play the game, it's just a shame about the emulation sound quality.

The game play is EXCELLENT, in fact when I was play testing this for the review I am writing now, I had my little cousins over, they are only 3, 5, and 7 years old. They absolutely loved the game, they could barely get 2 minutes into the game, but they just laughed there heads off at the little guy doing his little belly bounce to kill the monsters and things like that.

The game is a platform game, which requires quite a bit of skill and practice. This game is by no means hard, but it is also not too difficult. There are also many great comedy parts in the game, such as a giant dinosaur crapping, and you have to dodge it as it falls under his tail.

The plot behind the game is that you are Chuck Rock, while your beautiful wife Penelope was outside hanging her clothes one day, Gary Glitter or whatever his name is comes and snatches your wife away, so there begins your quest - FIND YOUR WIFE. To do this you have to go through various levels of the prehistoric, at first you go through the 'easy' levels that is set in a tropical jungle type of place, and then later you come to various other levels such as the Ice one and the underground one. Each level has got many stages to it, and to complete the game can take absolutely ages.

The graphics on the game are also great and the animation is smooth. I just love this game, but maybe it's nostalgia from when I was a 5 year old :) Either way, I still like it now!

A platform game, where you play the strange man from the stone-age, Chuck Rock. Nice graphics, funny music but not so good gameplay and control. Better to choose the Chuck Rock 2 :) 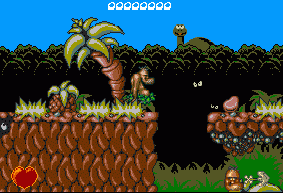