Beneath a Steel Sky

This game is one of the coolest adventures I've played. This was one of the first PC games I had ever played, and I bought it because of an excellent demo on my Amiga. And the CD I have is full talkie and everything, and so if you can find a place to buy that vesion, I would seriously recomend it, because it is much more fun to play!

Anyway, going into the game, you play Robert Foster, he has lived in the 'Gap' ever since he was a little child. He knew of no other world. But one day this ended and he was taken up in a helicoptor to a huge city, protected by a huge forcefield. Union Ciy was the name of this massive industrial city. It is filled to the brin with massive tower blocks. I guess the only way when you have filled a city space is up or down. So I guess they went up. Getting up and down these buildings is also not easy for Robert. Although, soon, Joey will have a nice way to get up and down them. Joey is the robot in the circuit board and is a robot you will build later in the game. I won't say any more about that though...

So I guess you are wondering what is happening with Robert when you get into the game. Well, as soon as they enter the city, it seems someone has tampered with the helicoptor controls, and you have had to crash land in the city, and then you did a runner. You then hid up on top of a wide open gridding above a factory, how the hell the security guard doesn't see you I will never know... Anyway, you have to somehow get past him. And to put it simply, the easiest way is never the best way :).

Anyway, as you will surely find out in your first few seconds of playing this game, you CAN die in this game. Although not very often, but I would suggest you save the game constantly just in case you in fact do die. I don't think it is possible to do anything wrong though, so unless you are a total nonce and cant figure the game out, then you should be able to complete it, even if it takes you a long time (which, in theory, it should). Anyway, this game has also got very nice graphics. They are hand drawn by some award winning comic book artist, named 'Dave Gibbons.' But they are extraordinarily well drawn and converted to the game.

The characters are also well drawn and move smoothly and look good. The grpahics are the standard for 1994, which was when this game was made. Actually, I lie, They are way better than they should be at that time! The amount of dialogue in the game allows you to understand fully the history and information all about the city and how it is ruled by a huge super computer called 'Linc.' Linc controls all of the things in the city, and the city is all about credit. The more important you are, the better things you have access to and the better quality your living quarters would be! You will find out much more when you play the game.

The game is extraordinarily complex, considering it is played straight down 1 tower block. You would think it would be easy to get up and down, but with that damn helicoptor crash, it is not as simple as it would first appear! So, you have to find another way to get down... Along the way you meet many people, Good and bad and obviously, you have to do things with many of them, and exchange items, etc... All in all, this is a very fine game which any adventure game fan would enjoy! If you dont enjoy it, then simply, you are a bum head.

An award winning futuristic adventure game with cyberpunk, dark sci-fi elements. A long game, with amazing story, graphics and gameplay. Also was released on PC and CD32 CD-Rom with audio tracks. A must play for all adventure gamers. 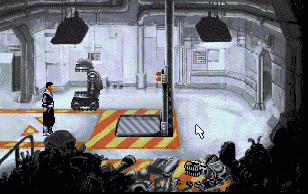 Beneath a Steel Sky screenshot