At heart, this game is a true platformer. But not just any platformer. The story, the characters, the plot, everything. The entire game creates such an atmosphere that when you start playing, and you finish the first level, you'll keep playing it.

The controls are okay, even though some parts are difficult to do. The game itself is pretty difficult, but the use of passwords makes it all a lot easier. The SNES version of this game is called Out of This World, but is in heart thesame game. The graphics are quite well-done and the animations are sublime. At some points it reminds me of Prince of Persia, especially the movement.

If you seek a game which will offer you a fair challenge, be sure to try out Another World. A pretty famous game which lives up to its name.

Big classical, which was followed by Another World 2, Flashback and OnEscepee. Not a typical platform game. Run, jump, fire, and use your mind to get through the hardest levels and puzzles. Your hero teleports to an unknown world, by an accident. It's full of dangers, and monsters. Quite hard, but interesting. 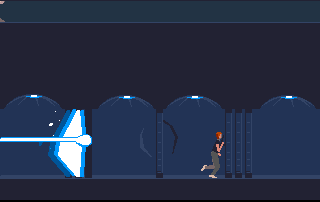