I remember the first time I saw this game. My friend and me were looking for a two player game and since there was nothing better - we picked a chess game. The game loaded, we started playing and I attacked his pawn with my knight. The figures moved into a position and started fighting!!! Of course, this is chess and the attacker always wins so I was relieved. But what the heck happened there? Welcome to Battle Chess!

This is a standard game of chess, but to make it a bit more interesting the programmers at Interplay allowed the pieces to actually fight each other. All the fights between pieces are animated and most are very funny to watch... for a few times then they get boring. That's when you switch to 2D view and play your normal chess game. There are ten levels of difficulty to choose from. Enough?

It's the most enjoyable Chess program ever! Has a fantastic graphics and ingame action. With moving your figures, you can kill the enemy. Beat them, shoot them, etc :) It's my favorite chess game! 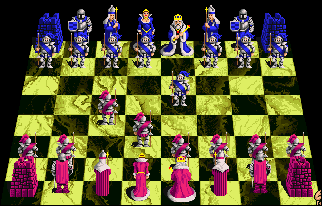