Commonly known as "the cause of Infocom's fall," Cornerstone is a revolutionary relational database application that unfortunately never sold as many copies as it deserved. The program was very powerful for its time, with many innovative features that were miles ahead of the competition. For example, Cornerstone allows you to attach descriptions to files and fields. This makes it very easy to remember their function if you do not use them for a while, or for anyone else not familiar with your database. The forms are 'smart' in what information you can enter. For example, if you have a company field, and you have a database of companies; the application will only let you enter companies that are in the database. Moreover, if you mispelled them, it can make suggestions. In addition to variable length fields, Cornerstone supports multi-value fields so you don't have to create separate fields for those variables.

Another incredible feature of Cornerstone is the powerful date parsing and displays. For example, the program understands such things as 'Next Wednesday', making data entry a lot more intuitive and simple. The program can also import data from many other databases such as dBase II, Lotus 123, or Symphony. All things considered, Cornerstone is a truly powerful piece of software that really should have sold many more copies. Instead, the application became the catalyst for the downfall of Infocom as the company had to borrow millions of dollars in loans to fund the program's development and Infocom's misguided shift to business software, and by the time the program was finally released in 1985, it would face a much stiffer competition, especially from dBase III. 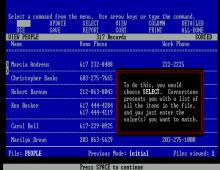