One of the better series of games from Capstone/Intracorp, Trump Castle games are solid casino simulations licensed by the famous casino of the same name in Atlantic City owned by Donald Trump, one of the world's richest (and most flamboyant) billionaires. The games basically are collections of casino games offered in the actual Trump Castle: roulette, craps, poker, slots, baccarat, and blackjack. Up to 4 players can compete at once in hotseat mode in Trump Castle 1 and 2, and over the modem in Trump Castle 3. The games themselves are quite faithful to the real-world games, and the AI is quite decent. Unfortunately, the games don't offer tournament or career mode, unlike QQP's underrated Lucky's Casino. In terms of content and variety, there aren't as many casino games or variants as, say, Beat the House, but that is only because Trump Castle is meant to represent the actual games played in the real Trump Castle. The games are identical in terms of gameplay, with better graphics for each iteration of the series. Trump Castle 3 for example offers SVGA graphics-- a far cry from previous games. Curiously, however, the cool digitized photos from the actual Trump Castle used in Trump Castle 2 are dropped in favor of a more cartoonish-style graphics in the last game. This makes Trump Castle 2 probably the best game in the series, as you can walk around the casino to view different rooms (and some mundane remarks by casino guests) in the premise when you take a break from the games. Overall, the series as a whole are well worth a look by casino fans, although they are not as good as Lucky's Casino or Beat the House. 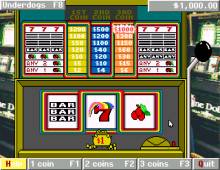