It hasn't been a very good year for Bullfrog. The British development team first filed Gene Wars (a very disappointing game), followed it up with Syndicate Wars (a lifeless sequel to one of the company's big popular titles of yesteryear), and managed to not release its most eagerly-awaited game, Dungeon Keeper, at all. Now they've released Theme Hospital. Despite pleasing graphics and a heavy dose of imagination, Theme Hospital never manages to deliver the goods on any of its gameplay promises, proving instead to be a minefield of frustration and angst waiting to spring on an unsuspecting audience.

The follow-up to Theme Park, Theme Hospital is at heart a god-game in the vein of SimCity or Populous. Using a pleasingly simple interface, players are asked to create a hospital that can stand up to a constant stream of patients inflicted with bizarre ailments. Good hospitals will include: the latest diagnostic tools, from the basic Cardiogram to more advanced choices like the X-ray and Scanner; the most advanced treatment facilities, including pharmacies and operating theaters; the latest specialized equipment - Inflater units for patients with Bloaty Heads, Fracture Clinics for those with Bandages, and so on; and, of course, a staff to run, organize, and maintain all of this equipment. Bad Hospitals won't manage to live up to the challenge, and will be shut down after killing off too many people. After healing enough people and earning enough money, you - and your hospital administration skills - will be praised by the Health Board, and you'll be invited to take over a new hospital with a greater set of challenges and rewards. The idea is simple, the gameplay is simple, and all of it turns out to be addictive and entertaining... for a while.

Once you've mastered the basics, your day-to-day life within the Theme Hospital universe will revolve around keeping your staff happy (by keeping them warm and giving them raises), making sure your patients are happy (by keeping them warm and making sure they don't have to wait to long for a doctor), making sure your hospital looks nice (by hiring loads of maintenance men to water the plants and clean up trash), and fighting off emergencies (in the form of visiting dignitaries and epidemics). Most of these tasks are easy to the point of not really mattering - when someone asks for raise you say "Yes," and when you have too many patients you build more rooms. But the tasks that aren't simple are aggravating in the extreme - to the point of making the game unbearable. The game's flawed AI routines seem designed to make sure your staff is never where it should be. Handymen wander the empty halls of your medical facilities while patients stand up to their waists in trash in waiting room. Specialists (surgeons and psychiatrists) always seem to be unable to perform their specific duties because they have volunteered to do the work of the general practitioners, while the general practitioners wander aimlessly through the halls. When a set of emergency cases (which must be cured before a time limit runs out) arrive, there's often no one to meet them at all, even if you have corridors full of qualified personnel. While there are sliders and bars to adjust, which are supposed to affect the priorities and policies that your staff follows, they seem to have little to no outcome on the recurring problems that haunt the game.

In the end, there are a few great things about this game - it boasts fantastic graphics, realistic (if often annoying) voice acting, and a lot of (also frequently annoying) humor. But like many of Bullfrog's other recent releases, the game just doesn't fly. If you think a little hospital managing sounds entertaining, download the demo and pretend that there's no more to the game. This may sound silly, but in the end, it's free, and it's guaranteed to be a lot less disappointing than coming face-to-face with the real thing.

Theme Hospital is a highly original game that unfortunately sports too many monotonous levels and too easy gameplay to sustain long-term play value. As the name suggests, game puts you in charge of a hospital, and your job is to cure a given number of patients before your hospital goes broke, or overtaken by armies of angry, sick people. Meet the winning conditions for each map, and you will be go to the next map, where you must build a new hospital from scratch to meet more challenging goals than the last. The game's highlight is definitely the diseases, which, similar to the sins in LucasArts' Afterlife, are imaginative and all very funny. Ailments range from the mundane, such as baldness (ouch), bloaty head and bone fracture, to the more exotic such as radiation, invisibility and slack tongue. Most diseases require its own treatment/operating room, so you must observe the clients' pattern and plan the hospital layout carefully to ensure that every patient can get to the reception area, then to diagnosis area, then to appropriate treatment room in a straight a line as possible. Similar to Theme Park, as you expand your hospital you can buy up adjacent plots to use. Watching the patients roam the hospital from room to room is very enjoyable-- especially since you can zoom in to each patient (like all Bullfrog games) to learn their name and condition. Unfortunately, Theme Hospital is simply too easy for all but the most inexperienced gamers. It is very hard to lose a level, unless you overspend ridiculously, and even then you can usually recover, with time. You can win easily by agreeing to all pay raise requests to keep the best staff, and doing the research regularly. One of the few things that *can* make you lose a level is the epidemic, which occur on later levels. Epidemic requires you to frantically scan your hospital for patients with contagious markers on them, vaccinating them, and curing them before the health inspector arrives. lest you take a financial hit and a reputation loss. There is also an emergency situation, similar to the special delivery of Railroad Tycoon: if you choose to accept one, you get a helicopter full of sick patients who must all be treated in a time limit for a cash bonus. These events, along with the earthquake, does add some adrenaline rush to an otherwise staid game, but gameplay is overall very repetitive, and easy. After the first 7-8 levels or so, you'll have seen all you can in the game, and from then on it's just a matter of using the same strategy over and over. The "random hospital" option similar to Sim City would have made the game much better. As it stands, Theme Hospital is still highly recommended for its quirky, original gameplay, but don't expect this to replace Civilization from the permanent slot on your hard drive. Two thumbs up! 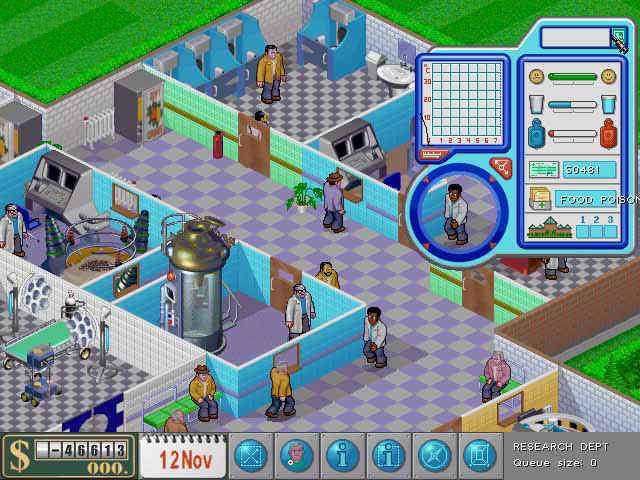