Virtually unknown outside Asia, Banpresto's Super Robot War is a popular series of video wargames that began on the NES way back in 1990. The series is based on Banpresto's wide range of "mecha" franchises including Gundam, Magaziner, and Eva to name the more famous ones. SRW also features Cybuster, a new mecha series created by Banpresto specificially for this series. Super Robot War 3 is the third game in the series, released on the Super Nintendo in 1993. Like all other games in this series, SRW3 features "SD" (short for "super-deformed") robots collectively known as "Divine Crusaders" as they battle to save the galaxy from the evil robots.

The game is turn-based, and plays much like a typical hex-based wargame on PC, except of course much simpler. Each turn, you move units around the tactical starmap, trying to annihilate all the enemy units (some battles have a different objective, but those are few and far between). When you issue "attack" command and the enemy units are in range, the 2D overhead view switched to a cool close-up of two mecha units in combat, much like in Gundam anime series. As someone who grew up with Gundam (aired on TV when I was a kid) and friends, these close-up combat sequences are my favorite part of the game, although I suspect anyone who is not familiar with these robots will find them merely cool ;) In between battles, you see how the story advances, and get to upgrade your robots and their weapons with funds you receive as a reward for defeating enemy robots.

Compared to a typical wargame on PC, SRW3 is very simple. However, the simplicity in my opinion is a boon in this case given the focus on storytelling - and the story in this one is as fun as the best of Gundam episode. Although the overall plot is hackneyed, the way it develops is very well handled, thanks largely to a good translation effort (for once) from the original Japanese. Gundam fans will find a lot of familiar characters who have a lot of speaking parts. Clashes between characters' motives and agenda, secret conspiracies, and surprise attacks are part of what makes SRW3 a lot of fun to play. If you like mecha, anime, or just fun "beer & pretzel" turn-based wargames in general, check out this fun game that never made it outside Japan - but can now be played in English thanks to the efforts of tireless translation group Aeon Genesis. Recommended! 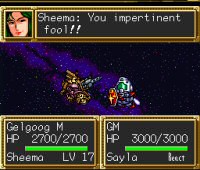