Saralon is an entertaining Chinese-flavored puzzle game. Uses some ideas from Activision's earlier classic Mahjongg game Shanghai, though with different rules and offers more than enough of its own to not be considered a clone. Nicely presented; fun, especially if you like puzzlers. The manual is in German. I won't translate it... me lazy webmaster ;) Recommended, especially to anyone who likes Mahjongg variants or Oriental board games in general who wants a more challenging game that relies less on luck than skills. 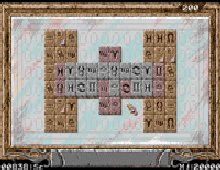 People who downloaded this game have also downloaded:
Terrace, To Serve and To Protect, Twilight 2000, Shogi Master, Viking Siege