Monad is an excellent freeware PC version of Sid Sackson's classic card/board game of the same name, released as Die 1 Million in Germany. The wonderful description at this Sid Sackson fan site says it all:

" The deck of cards has five denominations, in each of six colors. There are the Commons, which are equal to 1. A Bi card has a value of 3, a Tri card is 7, a Quad card is 16, and a Quint card is 36. A Monad is a round cardboard token with an 80 on it. The object of the game is to accumulate the required number of Monads, which differs depending on the number of players.

Where the game is truly original is in the relationship of the suits (colors) to one another. Three of the colors are "warm" colors, and the other three are "cool" colors. Each warm color has a counterpart cool color, which combine to form special bonuses. Every player holds in front of him a card to remind him of these relationships.

One of the things I love about Monad is that there are so many different ways of achieving your objective, and many different strategies. You can trade up, which involves trading one warm and one cool of one denomination for the next highest one. This is probably the most common play. If the warm and cool cards you trade are counterparts of one another, this gives you a special bonus of one each of all cards lower than the ones you traded. (So, if you trade a yellow Quint and a green Quint for a Monad, you'll also get a free Quad, Tri, Bi, and Common, if they're available! You can also buy, which uses those number values I mentioned above, which is useful if you have, say, two cool Tri cards and desperately need the Quad that's next on the pile. You'd buy the Quad (valued at 16) with the two Tri cards (7+7) plus either a Bi or two Commons. Not as good a deal as trading, but still effective. You can also "leap." This is when you take 4, 5, or 6 Commons of different colors and trade them for a Tri (4), Quad (5), or Quint (all 6). Also, each player has a different color that is his Joker color, and he can use any card (except the commons) of his special color as any denomination he wishes. So, if your bonus color is the "warm" red, you could take a red Bi and pair it with any "cool" Quint to get a Monad. If you can't make any trades that way, you can either draw from the discard pile of commons, or if it's depleted, you have to flip it (a humiliating eventuality, as it really wastes a turn).

My initial criticism of the game was that it was a game that played you, rather than you playing it. In other words, that you just waited until there was something you could do, and then when there was something you could do, you did it. But now that I've become much more familiar with the game, I think that's not at all true. There is a lot of strategy in trying to keep other players' joker cards from them, trying to keep them from making bonus combinations, and in picking just the right moment to make the moves you can make." In short, if you enjoy abstract strategy games, you will love Monad. It's fun, it's original, and it's a very challenging strategy game with very little luck involved. 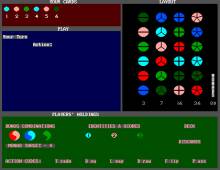 People who downloaded this game have also downloaded:
Monad (a.k.a. Die 1 Million), Nemesis: The Go Master, Norow, Master of Orion, Machiavelli The Prince (a.k.a. Merchant Prince)