Mini-Avalanche is a nice little PC version of Avalanche, a 1966 reflexes-oriented game from Parker Brothers. In this 2-player game, the players take turns dropping balls from the top of the board. On their way to the bottom, the balls will be stoped by several seesaws (called "gates" in the game). You collect all the balls that fall to the bottom of the board at the end of your turn. The goal is to arrange the gates and drop balls from the correct positions so that you can collect as many balls as possible, as well as prevent your opponent's balls from falling down. The winner is the first player to end a turn with all holes in his/her slot (to the side of the board) filled up with balls of correct colors (i.e. yours). The game is fast and quite a lot of fun, although it takes some time to understand the rules (you can download PDF rules of the original board game below). Highly recommended! 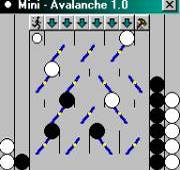