Min-Ha-To is a great PC version of a fun card game of the same name, which is essentially the Korean equivalent of the Japanese game of Hanafuda (or "flower cards" as it is known in the West). A special deck of cards, called Ha-To, is used to play the game. The deck has 12 suits of four cards each; each of the 12 suits has a picture, often a flower, which relates the suit to one of the twelve months. Your goal is to match the cards in your hand with one of those in the playing area. A match is two cards in the same suit. You must play a card from your hand every turn, even if no match is made. Once all the cards have been played, the computer will display all the point value cards and total the scores. The loser of the hand will deal the next hand, and the winner will play first. In addition to normal scoring, there are six special combinations of cards that give bonus points. The points for these combinations are not only given to the winner, but they are subtracted from the opponent's score also.

This freeware PC version is very true to the card game original, with attractive card graphics, intuitive mouse-driven interface, and a competent computer player. If you enjoy Hanafuda or unique card games in general, Min-Ha-To deserves a spot in your collection. Highly recommended! 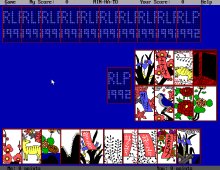