Leong is a decent one-player board game from Robert Roberds of BSX International. As you would expect from a shareware developer that is famous for original games, Leong is yet another invention by Mr. Roberds - although this time it is not that different from a more complex version of "Peg Solitaire." From the included instructions: "the game is played on a square board, with 25 grid squares on a side. You start off with 50 pieces in the bottom two rows. In the middle of the top row is the goal, five squares wide. The point is to get one of yer pieces into the goal. It's simple: a piece can be moved to any adjacent square, so long as that square is itself adjacent to another piece. To execute a move, click the left mouse button on the piece to select it (it will be outlined in white). Then click on the square you with to move it to. It's that simple. If you select a piece and change yer mind about it, just click the right mouse button to unselect it."

Luck also plays a part in this game, because hidden on the board, similar to Minesweeper, are many pitfalls. If one of your pieces lands on a pitfall, it dies, leaving only an X to mark the spot. Therefore, Leong actually requires some careful planning as well as luck: do you attempt to make a straight line to the goal, or do you hedge your bets by sending out groups of 2-4 pieces in different directions? Since the layout of pitfalls differs from game to game - they are randomly placed - no two games of Leong will be alike. If you enjoy one-person board game, check out this interesting game. Ultimately, though, it does not have as much originality as BSX's other games, nor does it offer enough gameplay variety for puzzle fans. Too bad.

Note: like other BSX games I reviewed, this is actually marketed as "shareware" but since the registered version is identical to the shareware one (except for the absence of "nag screen"), I have labelled it abandonware here. 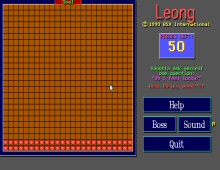