From Brian Moriarty's tribute to Dani Bunten: "Ozark wanted to follow up Seven Cities [of Gold] with a computerized edition of one of the classic Avalon Hill board games, but Electronic Arts had other ideas. Some executive arm-twisting and a substantial cash bribe resulted in a sequel, Heart of Africa for the Commodore 64, which continued the formula of action and strategy, exploration and history. It achieved less than half the sales of its predecessor." 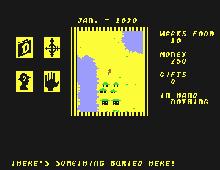