One of the first attempts by a Spanish game company to capture market share in the crowded strategy games market, Genghis Khan is unfortunately a failure - due largely perhaps to too little time on the drawing board (the developer Positive was struggling with financial troubles at the time of the game's release). The game tries to blend Positive's strength in fun arcade games with strategic options, but the result is a laughably simplistic game that will appeal to gamers of neither camp.

Set in ancient China, the premise is straightforward: as Temujin (later to be known as Genghis Khan), your goal is to invade and conquer China, marching your army from Mongolia. The range of strategic options is extremely limited: you can choose a territory to invade, send spy, recruit warriors, and "displace" warriors or Khan - that's about it. When your army invades a hostile territory, the game switches to a side-scrolling view in which you battle enemy soldiers in typical arcade/platformer fashion. Although the game does let you choose from arcade, strategy, or both, neither aspect is implemented well enough to maintain your interest for long. The strategy options are far too simplistic to be of any use, and the arcade portions are repetitive (although the animations are nice enough for the time). Overall, a game that adds nothing to either genre it was aiming for. Of interest only to die-hard collectors: this PC version - published by Microdaft as "shovelware" on CD-ROM in 1993 - is one of the rarest PC games in existence. 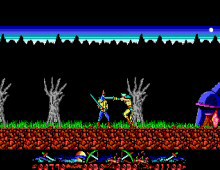