The Games People Play is a lackluster collection of two card games (Gin and Cribbage) and two board games (Checkers and Backgammon). Clearly Software Toolworks wanted to market the game as a "premium" title, touting numerous features and endorsements. For instance, from MobyGames game entry: "Gin and Cribbage offer supposedly personality-based A.I. advisors and opponents. The checkers program is endorsed by the American Checker Federation and includes official play rules such as 2-move and 3-move openings. The backgammon game has four variations of play (Traditional, Acey-deucy, Dutch, and Plakoto)."

Unfortunately, these features cannot make up for the fact that none of the games in TGPP is particularly challenging. I was able to beat the computer opponent in all 4 games fairly consistently - the AI is a far cry from a decent one in Software Toolworks' own Chessmaster games. Since AI is the most important aspect of a good board game, TGPP leaves a lot to be desired. Recommended only if you are a novice to these games and prefer to learn the games rather than finding a tough opponent to beat. 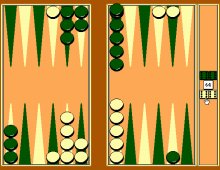