Fritz 2.00 is a great program that is currently the most powerful artificial chess player in the world. This is the early version of Deep Fritz 8, the program that tied 2:2 in an exciting match with world champion Garry Kasparov. Even in this early incarnation, released by ChessBase in 1993 to a limited number of retail channels, you can already see how powerful Fritz is. It is a very tough chess opponent that rarely makes 'mistakes.' I am not a good enough chess player to vouch for its AI, but I asked a friend who was a New England champion at one point and he said it definitely plays much better chess than most programs - and probably was the best in 1993, when it was released. Although the game is more or less a "no frills" chess program with limited options, it does have an intuitive mouse-based interface, crisp graphics, and plenty of historical playing books you can use. Definitely one of the most powerful, although not completely accessible, chess programs ever made. 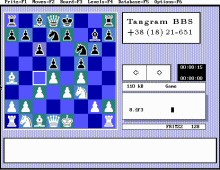