Farkle is a small but fun PC version of a medieval dice game of the same name. The objective is to score points by rolling combinations of dice, until one player scores over the 'game' score. Each player starts his/her/its turn by rolling all six dice. From this roll, any/all of the scoring possibilities my be 'held', and the remainder rolled again. If all six of the dice become 'held', then all six may be rolled. This continues until the player decides to keep the points gathered so far and pass the dice to the next player, or until no scoring combinations are rolled (ie. Farkle). Any points for that turn when a player decides to stop rolling are added to the score. Any points for that turn when a player farkles, however, are lost. The only cavaet is that a player cannot pass the dice until he/she/it has at least 500 pts. This means the game requires a combination of strategy and luck about how far you should press your luck. This small Windows version is a good implementation, although no computer AI has been implimented yet. It's fun as a solo game or against another friend, though :) If you enjoy dice games or puzzle games in general, give Farkle a look. 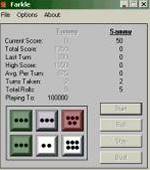