Droids is a neat little action/strategy game for one to four players that plays like a cross between Pac-Man and the old board game MaxIt. The game goes as follows: there are four droids on Mercury which are used to retrieve minerals. A 15x10 grid represents the planet's surface, and each cell on the grid starts out with a mineral that the droids can retrieve. During the game, players take turns selecting one of the droids, and giving it a direction to move. The droid will keep moving in the selected direction for as long as it is able to retrieve minerals. The game ends when all four of the droids have become trapped (i.e. no more moves can be made), and whoever retrieved the most minerals wins the game. Simple to learn, but quite fun to play with friends huddled around the same computer. The single-player game is a bit too banal and repetitive, however. 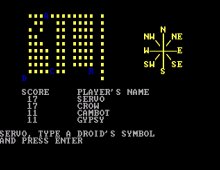