This is a simplistic but fun board game that needs 6 people to play (you'd think they could come up with a decent computer AI by 1988....) as various characters from Bram Stoker's novel. The object, of course, is to track down the count and put an end to his reign of terror. Players can visit various places to obtain clues, buy hunting equipment, and visit various characters during the day. The inclusion of many abstracts from the original novel is a nice touch.

Note: SDJ later released an enhanced Windows 3.1 version in 1993, which is also on this site. Check it out if you like the original. 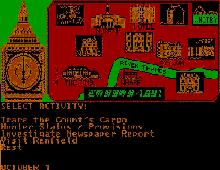 People who downloaded this game have also downloaded:
Dracula in London (Windows), Defender of the Crown (EGA Version), Captured by Pirates!, Dragonriders of Pern, Cohort II (a.k.a. Fighting for Rome)