This is the enhanced Windows 3.1 version of SDJ's underrated Dracula in London board/adventure game hybrid, first released in 1993. As MobyGames points out, "...the ASCII graphics and CGI color have been replaced with improved black & white graphics and very slightly modified gameplay." Perfect for anyone who likes the unique gameplay of the original game, but wants better graphics and a bit faster play. Here is more detailed description from MobyGames on the original (which is also on this site):

"Dracula in London can be played as either a board game with multiple players controlling different hunters, or as an adventure game with a single player controlling all six characters. Each character has their own special abilities, for example John Harker is the only character able to follow up on clues, and Dr. Steward is the only character able to pick locks as well as calm down asylum inmate Reinfield if the madman should get out of control and attack your hunters.

In order to locate the vampire's lairs, you must investigate local going-ons in London for signs of the count's presence. Once a lair has been found, you can equip your hunters with items and sacred weapons and explore the infested estates for the count and his places of rest. If you are unable to track Dracula down, he will flee to his family castle in Transylvania, and you can give chase for a final battle. But if you fail to destroy all his places of rest, there is a chance the count will escape and all your suffering will be for naught.

The highly random nature of the game ensures a different experience each time. The five or six locations in London are randomly generated, and can contain clues to be followed, coffins to be destroyed, vermin to be fought in combat, and even encounters with the evil count himself. Also, many different random events often occur which can influence the course of the game. Hunters may be stricken with illness, forced to visit an ailing relative, or arrested by the police for breaking and entering. The madman Reinfield may slaughter your hunters at Dracula's command, or he could become the unlikely hero who shows up at the final battle and dispatches the count for you. One of your characters, Mina, may be targeted by the count, and if you fail to protect her Dracula will transform her into a bloodthirsty vampires." 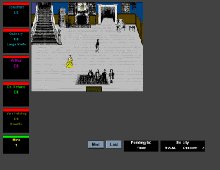