Captured by Pirates! is a fun turn-based board game of ship-to-ship combat among pirates on the high seas for 1-4 players, any of which can be computer-controlled. Each player begins the game with a fleet of 20 Schooner ships, the smaller faster attack ships, one Sloop ship armed with a cannon, and $500,000 in stolen treasure. You must use your treasures to trade for guns, cannons, and more ships for your fleet. If your Sloop ship is sunk or captured, your game is over, unless you have another Sloop in the water or enough treasure to buy another Sloop next turn.

Gameplay revolves around placing your ships on the game board, then taking turns to fire cannons at other pirates' ships. If an opponent surrounds two of your ships, it is called a capture! If they do this, they get those 2 ships and $300,000 in treasure. When ships sink because of cannon or gun fire, you lose your ship and the attacker gets $100,000 in treasure. You cannot control which ship your ship will fire at. Rather, it finds all ships in its range, and randomly selects one to fire at. You can however place your ships so that it will fire at a certain ship the first time. But when lots of ships are in range, it is a random firing selection. By placing more and more ships near your Sloop or the ship you are protecting, the less the odds are of it getting hit. When you run out of ships, buy more or move your ships already in the water. Sloops may only move one space while Schooners may move two. When all of your Sloop ships have sunk, and you do not have enough treasure for another one, your game is over. The computer will automatically buy you another Sloop if you have enough treasure. You can also search for the hidden treasure map which leads to $2.5 million, although it is a painstaking process.

Overall, Captured by Pirates! is a fun and pleasant little game that provides a good diversion from other games you might be playing. And in many ways, the game is a precursor to ImagiSoft's better-known Redhook's Revenge, excellent shareware title that is still sold for cheap :) 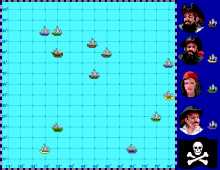 People who downloaded this game have also downloaded:
Machiavelli The Prince (a.k.a. Merchant Prince), Master of Magic, Caesar, Lost Admiral, The