Dominium is one of the early real-time strategy game that focus on planet conquest and resource management - as they have become so common nowadays. Overall fairly poor and far inferior to similar games such as Dune 2. Although the game plays from an attractive isometric viewpoint with many structures to build and resources to gather, it quickly degenerates into a game of "build as many units as possible to overwhelm the enemy." There is not nearly enough variety in the game to accommodate strategies other than outright military aggression, and diplomacy and economic models are severely flawed. All in all, a worthy attempt by Microids in the (back then) niche genre, but everyone is well advised to stick to Dune 2 and 4X classics for their galactic conquest fix. 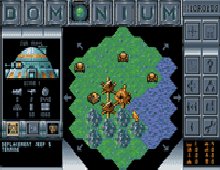 People who downloaded this game have also downloaded:
Deuteros: The Next Millennium, Castles, Fragile Allegiance (a.k.a. K240), Evolution: The Game of Intelligent Life