Decisive Battles in American Civil War games were an early attempt by SSG to offer an accurate portral of the war that became a hit many years later with Sid Meier's Gettysburg. Even if Decisive Battles games don't have 3D graphics and lacks almost all sounds, they are are still solid wargames that try to reconstruct the most important battles of the American Civil War.

The engine underlying these games is basically the same (Decisive Battles 3 just has better graphics): SSG's celebrated "Battlefront" system. It is quite peculiar because you can select to move every single unit or to move groups of units under the command of a leader. Leaders are particularly important for the resolution of the battle. The simulation is supposed to take into consideration terrain effects and weather, but to say the truth I haven't seen much difference in the resolution of the combats in a rainy day or in a clean day. Moreover, support is not taken into consideration, perhaps owing to some technical limitations. The strong point of both the simulations is that you can edit the scenarios proposed and make your own. There is a full tutorial that even explain how to manipulate the graphics.

Overall, these are solid war games that may not be for the real wargamer who needs more realism, but quite good for a newcomer. I don't think someone will still lose time to build new scenarios but the scenarios included are enough to satisfy all wargamers.

Volume 3 in this series covered the battles of Wilderness, Spottsylvania, Cold Harbor, Atlanta, Franklin, and Nashville. 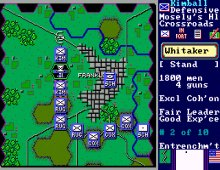