Dammit! is another rare solitaire game by Robert Roberds and BSX International. Theodor Lauppert gives a good overview and impression of the game at his website:

"Like so many solitaire games, [Dammit!] relies far more on chance than strategy and is nearly impossible to beat. Thus its title is appropriate. You will utter this phrase a lot while playing it. The basic idea of Dammit is simple. You lay out the cards one by one on a 4x4 grid. Your goal is to arrange the face cards like this: [two rows of K Q Q K separated by two rows of Jacks that form the edges]. As soon as the grid is full, you can remove all the tens and the pairs (or, if you play by the "wimpy" rules, groups) that that add up to ten. As soon as you get a face card that cannot be positioned properly, you lose. It is this last rule that make it especially difficult. However, you can beat it... The game itself is not Roberds' invention. He says he learned it at college. But his is the only computer implementation I know."

Compared to other solitaire originals from BSX such as Forzee and Wowzee, Dammit! is not as fun to play. This is largely because it relies far too heavily on luck to the point of making strategy virtually irrelevant. Relaxing the rule that makes you lose as soon as you get an invalid card would have made Dammit! more fun in my opinion. Regardless, it is still an original solitaire game I haven't seen anywhere else, and well worth adding to your collection of card games if you love solitaire. Like other BSX games I reviewed, this is actually marketed as "shareware" but since the registered version is identical to the shareware one (except for the absence of "nag screen"), I have labelled it abandonware here. 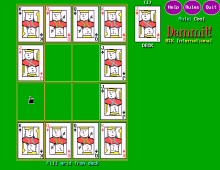